What has Catherine done with her life? 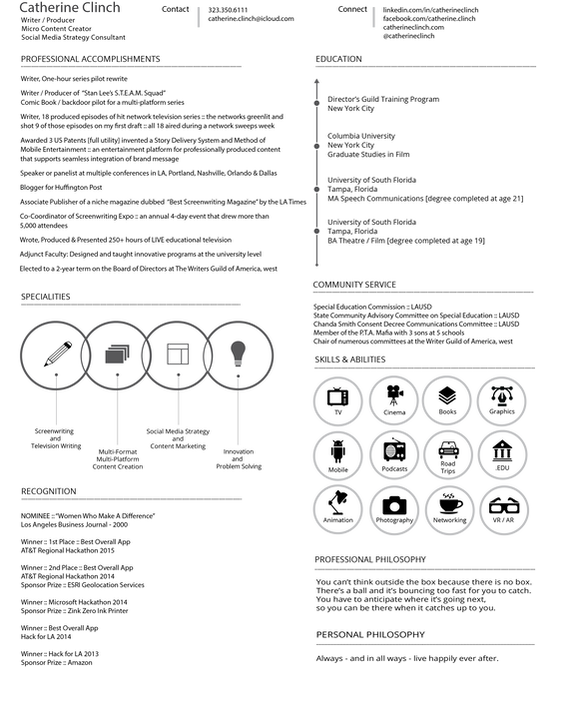 Instructor :: College of Extended and International Education, California State University, Dominguez Hills
Designed curriculum and created syllabus for a five (5) course certificate program in Social Media Strategy and Content Marketing. Full responsibility for teaching all five classes in a 48-hour immersion program. Students learn to use digital tools and storytelling techniques to develop a social media campaign and develop a multi-platform portfolio of digital content for the launch of their own social media campaign to promote a product, a service or a social cause. Courses are divided into the following areas:
Introduction to Convergence Media, Marketing & Advertising
Images, Graphics, Platforms and Content
Journalism, Publishing, Entertainment and eCommerce
Politics, Social Cause Marketing and Community Building
How to Make Anything Go Viral

Consultant :: Social Media Strategy and Content Marketing
Independent consultant for companies and individuals that want to establish a successful presence for their product or service in the commercial marketplace.

Creative Screenwriting Magazine :: Screenwriting Expo
I began writing for a tiny magazine that was being published on a kitchen table in Tarzana. Over the next 12 years, I worked my way up from writer to columnist to contributing editor to associate publisher. We launched CS Weekly - a digital online publication that was distributed to approximately 75,000 readers around the world. I created, contracted for and launched My Creative Community - the first social network designed to connect screenwriters with producers, directors, actors, financiers and production crews. In year seven, we created the Screenwriting Expo. Over the next five years, the Expo grew from a small event with 1200 attendees at the LA Convention Center, to more than 5,000 people spread across three hotels for a four day event that included Pixar University. When I left, the magazine/expo was a multi-millon dollar operation. Two years later, it was bankrupt and out of business.

Screenwriter :: ABC / NBC / CBS / Hasbro
Wrote 18 produced episodes of television for hit network series including HUNTER, JAKE & THE FATMAN, KNIGHT RIDER, THE LOVE BOAT, HART TO HART, FOUL PLAY, TRUE CONFESSIONS and RESCUE BOTS. It is interesting to note that nine (9) of these episodes were "green-lit" by the network on the first draft and went into production without any rewrites. Developed and wrote numerous (un-produced) movies made for television.

Adjunct Faculty :: California State University, Dominguez Hills.
Full responsibility for creating and teaching on-campus courses for the Department of Communications, and on-line courses for the Center for Mediated Instruction and Distance Learning. The courses are as follows:

Entertain(dot)ment blends Internet technology with live, interactive entertainment programming. It is designed to prepare students to write and produce LIVE interactive entertainment and informational programming. A LIVE, interactive broadcast blended LIVE action with simulations based on predictive models. It was presented entirely via the Internet. Real-time participants were scattered across the country and as far away as Malaysia. It is believed that Entertain(dot)ment was the first college-accredited course in the theory and practice of this new media.

Mass Media & Society is a televised educational series that was designed to examine the Mobius loop of influence between media and the social systems around which we structure our lives. Specific topics are explored in the context of how the media influences our perception of how the world is and how it should work. Topics include: the family, the role of women in society, comedy, romance, fantasy, science, violence, broadcast television, religion, blue collar vs. white collar, politics, cable, theatrical films, books and magazines, point of view, education, reality and lifestyle programming, radio, the Internet, the changing role of newspapers across the country and the incidental learning process. Each topic was explored through a variety of media formats and technologies.

Screenwriting is an upper-division course that is required for completion of an undergraduate degree in Communications. The goal of the course is to learn the craft of storytelling while maneuvering through the process of writing a spec screenplay. In the process of designing this class, I created and developed a unique and proprietary methodology to facilitate the creation of a commercially viable screenplay. This methodology simulates the experience of a working writer and enables the student to vicariously experience the professional development process. Students find this process to be a supportive framework for their creativity. Even first-time writers and non-majors enjoy an extremely high success rate in their endeavors.

Screenwriting Online via the Internet uses the same syllabus as the Screenwriting classroom setting. However, via Distance Learning I created an instructional model that interweaves two separate web sites. Lectures, discussions and supplemental readings are provided on one web site, augmented by weekly one-on-one critiques of the student’s work. A second web site enables the students to observe the instructor writing a screenplay while adhering to the same schedule and parameters they are required to follow. This paradigm provides students with a unique opportunity to learn storytelling by observing the creative process. This dual website model was successfully adapted to comply with the campus-wide standard of Blackboard software.

Writing The Story of Your Life builds upon the premise that a beginning writer should write what they know. The goal of this class is to teach writing students how to craft the stories of family, friends and life experience according to entertainment industry standards. Two projects (mid-term and final) must be fully developed as a written presentation that includes all aspects of the development process except the actual screenplay.

Adapting News and Historical Material for the Screen supports the growing trend whereby current events and historical material provide the primary source material for entertainment product. Each week, students are responsible for selecting three stories from any section of the Sunday LA Times – two current events and one story with historical elements. Each story must be fully developed and presented as a pitch. Two projects (mid-term and final) must be fully developed as a written presentation that includes all aspects of the development process except the actual screenplay.

Advanced Production Workshop is an upper-division course that is required for completion of an undergraduate degree in Communications. The goal of the class is to enable students to understand advanced production practices as they apply to the different styles and requirements of specific formats including news, entertainment, music videos, documentaries, advertising, magazine shows, oral histories, sports and education. The students implement advanced production practices to provide product for an educational series that is broadcast nationally by Knowledge TV, a division of Jones Inter-Cable.

Adjunct Faculty :: School of Film and Television  - LOYOLA MARYMOUNT UNIVERSITY
Full responsibility for teaching Screenwriting in a classroom setting. This is a required course for all Communication Arts majors. The goal of this class is to teach the craft of writing to students who were not majoring in screenwriting and who had never written a screenplay prior to taking this class. Using a unique and proprietary method of my own invention, the students began with a basic premise and moved through every step of the development process. At the end of the semester, they had each completed a 30-page screenplay. I am proud to note that three of these 30-page screenplays were commercially viable and of such high quality that I have urged the students to extend them to full-length screenplays.

Former Member :: State-Mandated Community Advisory Committee on Special Education (CAC)
This is an appointed position. The CAC was established under Part 30 of the Education Code, Sections 56190 through 56194. Attendant duties include advising the policy and administrative entity of the Los Angeles Unified School District regarding the development, amendment, and review of the local plan; recommending annual priorities to be addressed by the plan; assisting in parent education; encouraging community involvement in the development and review of the local plan; and supporting activities on behalf of individuals with exceptional needs.

Former Member :: National Advisory Committee to PBS Adult Learning Satellite Service
This video conference - "Putting Your Course Online: A How-To For Faculty"- was a joint venture of PBS and the Dallas County Community College District. The live-via-satellite transmission was endorsed by The Chair Academy (an organization that provides leadership training for deans, vice presidents and division chairs at community and technical colleges worldwide). My responsibilities included authorship of a written primer that was designed to explain the distance learning process through the course-creator's point of view, and to inspire faculty members to venture into new instructional media. This primer has been quoted and referenced in two doctoral dissertations and provides the opening quotation for another college’s website.

Former Commissioner :: Los Angeles Unified School District – Special Education Commission
This is an appointed position. The purpose of the Commission was to advise, assist and make recommendations to the Board of Education regarding educational programs, services and issues directly related to children with special needs. In July 1998, the LAUSD Board of Education disbanded the seven standing commissions and created a Human Relations Commission that covered all seven areas. At that time, I was appointed to the Community Advisory Committee (see above).

Instructor :: LEARNING TREE UNIVERSITY
Full responsibility for teaching a 15-credit course “Cops, Detectives & Dynasties: Writing the TV Episode.” The class began with an overview of types and genres of one-hour episodic series. Subsequent classes included an in-depth study of story, scene work, character arc and thematic development. Each weekly 2-hour class combined lecture with discussion designed to guide the writer through the process of conceiving an episode, working out the beats of the story, writing the first draft, rewriting subsequent drafts and the final production polish. Upon completion of this class, students had written a spec script that was ready for professional submission to agents and/or producers.

Literary Consultant
I have provided editorial services to writers and attorneys. Although most projects are written or developed for the screen, I have edited books, supervised the adaptation of a stage play to novel form, the creation of a companion book to a series of motivational seminars, and the structure and format for a book on dental surgery. I have also “ghosted” a non-fiction book on sexual harassment in the workplace. For the purpose of Intellectual Property litigation, I provided “points of comparison” analysis and sworn expert testimony in the matter of "Created By" credit for the NBC series MAD ABOUT YOU.

Former Director :: Board of Directors: WRITER'S GUILD OF AMERICA, west
This is an elected position to a two-year term. The Writer’s Guild of America is a labor union that represents television, radio, news and feature film writers for the purpose of collective bargaining. The Board of Directors is the governing body of the Guild, bearing full responsibility for supervising the enforcement and administration of all services that flow from the collective bargaining agreement. The Board of Directors establishes policy and plans the direction of Guild affairs.

Los Angeles Unified School District - Organized district-wide art competition that resulted in a 5th grade student’s illustration of the theme: “Inclusion Means Nobody Is Left Out.” The Parent Community Service Branch printed a full-color poster that was distributed to all LAUSD school sites and all LAUSD administrative facilities.